The guitar is a musical instrument used widely in the drama and music industry. Different tunes are produced by guitar using the strings on it. The composition and look of this instrument are so classy and attractive that one loves to buy it.

It also has various colors and shapes of it merely flawless. Different tunes are made out of it using strings and learning the art of playing the guitar. In THis Article, I am going to write about preamp for the guitar: What is The Role? How Does Preamp Work? Let See: 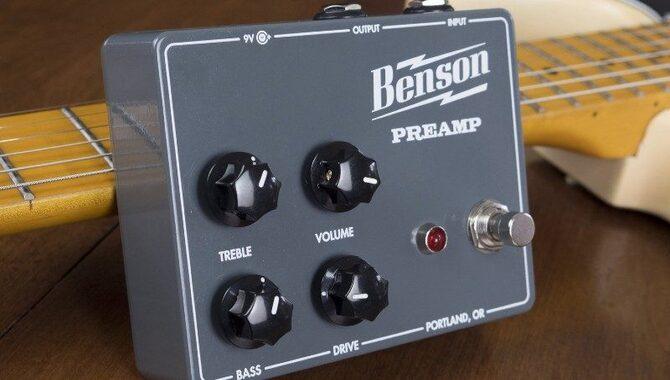 What Is The Role Of The Preamp For The Guitar? 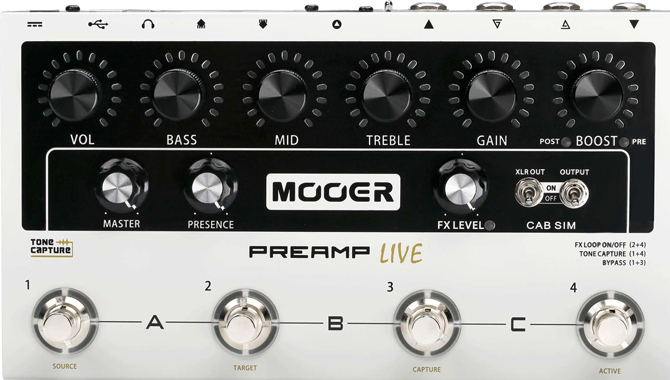 There is a special making process of guitar, and when tunes are produced by using fingerboard made of strings, a loud sound produces from guitar due to preamplifiers.

Preamps within guitar play a role to make sound loud because they convert the weaker signals they received into a stronger and louder signal. That is the reason the sound heard by the playing is very vibrant 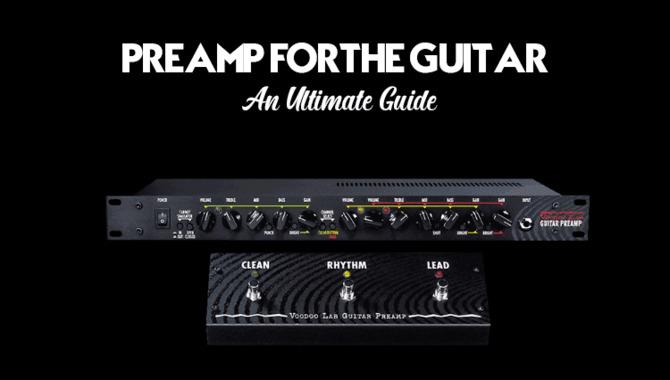 How Does Preamp Work In Guitar? 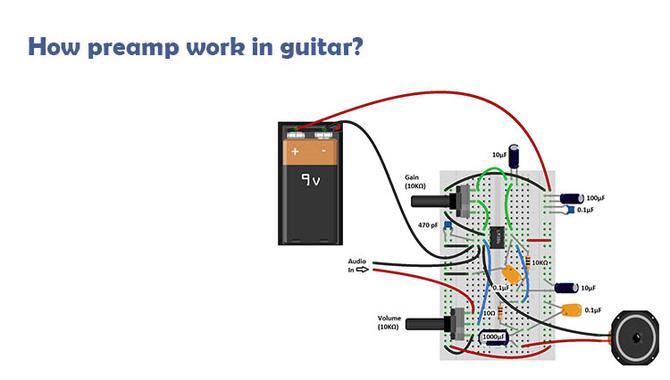 To play good sound out of a guitar, firstly it to be tuned. Similarly, various other instruments are fitted into its making so that it could work properly and serve its purpose. When strings vibrate, they produce waves, and the waves are so weak that they cannot be heard to the audience.

Hence, a preamp is attached inside the guitar, which catches the signal, makes it stronger at its first stage, and then pass it to the second stage, which makes it stronger. In addition, at the final stage, it is most reliable.

(a) A Tube Preamplifier :

Usually, a tube guitar amplifier’s preamplifier stage consists of only one triode, which links in a typical-cathode system.

At this point, the aim is to optimize the voltage gain achieved by taking into account the maximum plate current with the operating voltage applied and choosing the plate resistor RL according to that limitation.

Form 12AX7A tubes are mostly used because they have fairly, high amplification factor (μ = 100) equivalent to those other related vacuum tubes. The preamplifier output is made flexible in the amplifier user interface by inserting a three-terminal resistor after output condenser.

The potentiometer is marked in the front panel of the amplifier control board as the ‘intensity’ control knob. In comparison, the master volume control usually connects to the amplifier’s second voltage gain level.

The second section of the voltage boost is required because the passive tone control section following the preamplifier usually reduces a reasonable amount of the signal.

(b) A Solid-State Preamplifier: 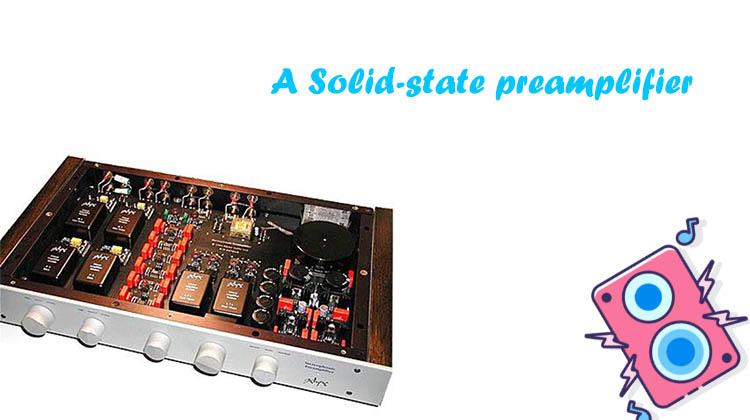 Because the tube preamplifier makes use of discrete tubes as the amplifying components, using discrete transistors in the preamplifier is not feasible to settle for a close solution in solid-state.

The output achieves easily through operational amplifiers, since they are almost perfect amplifier components, and with relatively low operating voltages, they can give a high gain.

A dual op-amp IC is usually used at the user interface end as a connection to the input and master level potentiometers. The first op-amp circuitry is responsible for the pre-volume control, and a sound control section usually follows in this level.

The second op-amp circuit manages the main volume adjustments after the tone control and supplies the amplified signal to a differential amplifier, which precedes the power amplifier circuit.

Hence, preamp guitar serves the role of convertor in guitar. It converts a signal produced by wires of the guitar into a tone shaped musical voice note. These voice notes combine, and a complete song forms out of guitar tunes.

They two instruments can be used alternatively. They both are substitutes but work in a bit different manner. Preamps in guitar have characteristics like those that they can switch between multiple channels, which have a lot more controls each with the independent setting.

Preamp pedal contains a switch for two channels. It also has a feature of a delay effect, which is a highly appreciable quality in working of the guitar.

However, distortion pedal might contain only a simple pedal with a switch for bypass. Therefore, it is less sophisticated than a preamp pedal and is simpler generally. 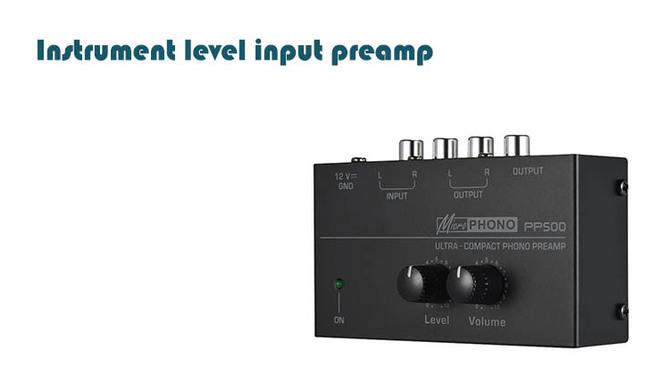 However, line-level produce a bit more loudly and clear sound as compared to instrument level. There is a difference in the quality and strength of music in both these kind of preamps.

Types of Preamps in Guitar: 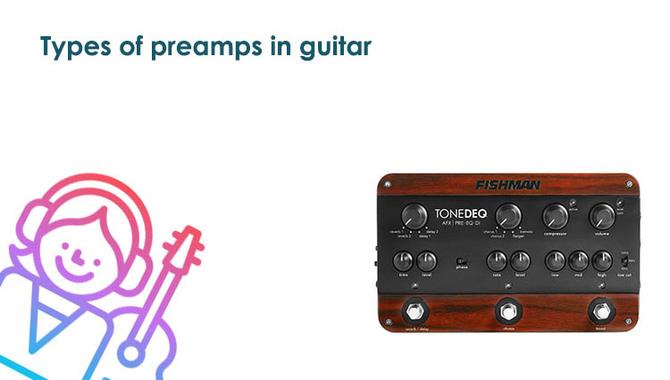 Usually, guitar amplifiers have their preamps. Both types of line level and instrument level & input preamps are present within amplifiers of the guitar. Some guitars sound better when instrument-level preamp use in them.

However, for others, it does not work correctly, and hence line-level preamp is fir into their amplifiers for their proper functioning. 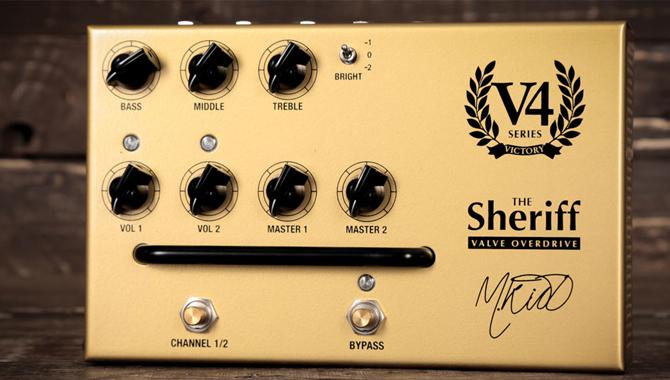 There are various forms, size and types of preamps, coloured or simple having different series of formats and these preamps although have the same primary function of enhancing quality and strength of signals. However, their processing of working can vary according to their type.

That is why a specific type of preamp used for every instrument. Moreover, each preamp has different targeted goals to achieve. Some preamps only amplify sounds; some also colour the waves to make the noise even more beautiful.

Process Of The Making Of Guitar: 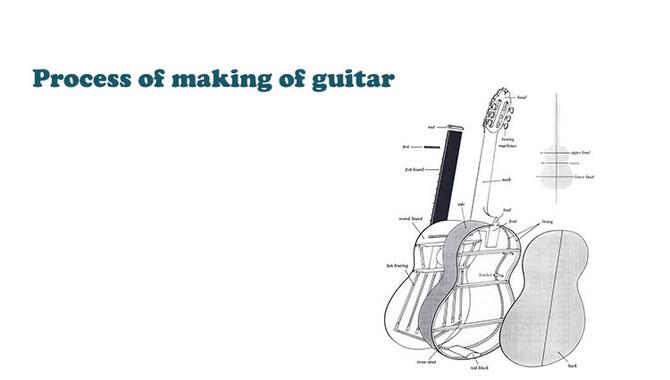 Instead of preamps, various other instruments also used to make a guitar and give it such an eye-catchy look. Woodworking, known as Luthiers, had manufactured them from multiple years.

They are all hand made mostly. Soundboard strings belly neck and frets are parts of the guitar, and they are gathered into a particular shape in a unique way to get the proper result which is desired.

With the passage of time as the work of luthiers rarely become available, people started making line guitars and this brought revolution to the guitar industry. Still many materials of making it remain almost the same. Ash is used to producing body and neck of the guitar.

Plastic and various other metals also used instead of wood. Aluminum is most popularly used in guitar making, which makes it durable, protect from rusting and add shine to its body to enhance the overall look. Recently durable carbon fibers have also been used.

These are programs used for making guitar body manually. However, final assembly of all parts and testing is still performed by human hands and ears.

I hope now you get the news of preamp for the guitar.

Tags:PREAMP FOR THE GUITAR, Types of Preamps in Guitar: 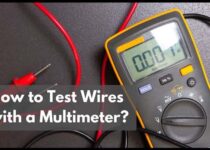